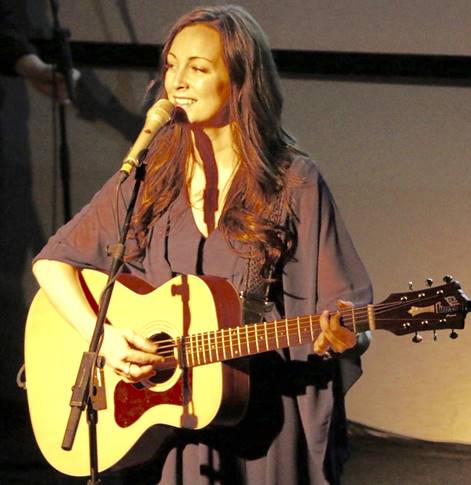 If you could cross the creative talent of a right brain artist with the brilliance of a left-brain business entrepreneur, what would you get? That answer would be Tara MacLean.

Kristin and I were among some of the fortunate people who attended the opening night of Atlantic Blue at The Guild Theatre. This was an evening of amazing music, combined with storytelling, and highlighted some of the best talent from the Maritimes.

With her on stage was Todd MacLean, Cynthia MacLeod, Caroline Bernard, Mark Geddes and Aaron Crane.

It was extra special and nostalgic for me, because years ago I was involved in the music world and personally knew some of the musicians she showcased. Tara created this show and presented it with class, authenticity and dignity.

Although Tara is tremendously talented, my purpose in writing this article is to highlight how a talented person can turn their gift into a viable business.

Some background on Tara: She is a seventh generation Islander (with Irish roots) who learned to sing, play guitar, and write songs. Her father was a singer and dancer, her stepfather was a songwriter, and her mother was an acclaimed theatre and film actress. She initially wanted to become a lawyer, but music was deep in her DNA and too strong for her to battle.

In 1995, she went to San Francisco to record her debut album “Silence” at Brilliant Studios.  She sold over 20,000 CDs just from her U.S. tour. In 1997 she released a five-song EP of remixed songs called “If You See Me.”  That same year she was named best new solo artist at the Canadian Radio Music Awards.

However, as Tara realizes, music and music business are two different things. The music business chews people up and spits them out. Van Morrison once said:

Music is spiritual, the music business is not!

It is so difficult for a talented musician to make money – that they get to keep!

She took a hiatus from the music world to have children, but now Tara is back – with a vengeance.  She is blending all her strengths and is now writing, creating, producing, directing, and starring in her own show – Atlantic Blue.

Her passion in life is to touch hearts and inspire others to do their absolute best — while enjoying the journey along the way. She is equally committed to creating space where other musicians can showcase their talents.

But to do this there needs to be revenue and profitability. Most artists just look at the revenue side of the equation. They continue to trade their time and talent for low returns, while making promoters and agents rich.

Consequently, Tara has become an entrepreneur: learning about marketing, finance, bookkeeping, fundraising, sponsorships, and understanding the necessity of profitability.  She says:

– searching for revenue streams beyond ticket sales.  Tara has the strength and fortitude to do whatever it takes.

As she will tell you, there are many individuals (too numerous to mention) who have supported her and sincerely want to see art survive in P.E.I. Among those include Danny and Martie Murphy, who not only support, but back it up with funds to subsidize talent locally.

Tara plans to take the show on the road and into the corporate market (she is already receiving overtures from other cities). She knows that to be successful in the entertainment business, you must love your audience − Tara truly does, and she would truly love to see you at one of her shows this summer.

International Day of Happiness: 6 Ways to Increase Your Happiness