This is an innovative activity with a structured opportunity for groups to experience competition and opportunities for cooperation and collaboration between functional organizations.

The exercise works well with 4 groups of equal size in a space large enough for each group to collaborate. The time allotment is 15 to 20 minutes.

Instruct the teams that they are divisions within an organization and that their goal is to make money by voting for the organization. Money is made or lost as they vote either “Green” or “Blue” and by their voting pattern in accordance with the following payoff schedule: 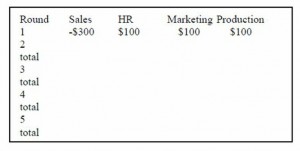 Do not elaborate further on these instructions. Repeat them as necessary. At the close of each round, tally each division’s dollar balance in that division’s column.

Play five rounds according to the following instructions:

Round One – No additional instructions given. Discussions within the group, but not between groups.

Round Two – Same as round one (it takes two basic rounds before they really start to catch on to the game).

Round Three – Each group selects a delegate, and the delegates circulates from group to group, lobbying for the groups to vote a particular way; delegates return to their groups and the vote is taken.

Round Four – Delegates meet together privately and then return to their groups and the vote is taken.

Round Five – Same as rounds one and two; no discussion between groups.

After all five rounds, tally the total amounts earned by each division and then the company’s net worth.

Debrief and Summarize
After computing the totals, debrief the activity: