Picture This: Salmon Fishing in Yemen 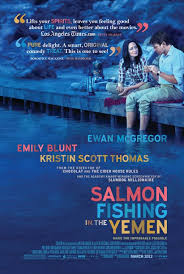 On holidays, my family has a long-standing tradition of going to see a matinee at the movie theater.  The challenge is in finding a movie that appeals to all – and that no one has seen before.

This Easter was no different than all the other holidays!  We looked up our favorite movie theater (18 choices!) and narrowed it down to two.  After reviewing the trailers, critic reviews and rotten tomato (audience) reviews, we selected a British film, Salmon Fishing in the Yemen.  As my mom said, “Oh, a couple of my friends went to see it and said it was ‘charming!'”  That sealed the deal.

It’s an intriguing title, don’t you think?  Who would think one could go salmon fishing in the desert nation of Yemen?  Evidently, a wealthy (and handsome!) sheikh (Amr Waked) thinks so and asks his British representative, Harriet Chetwode-Talbot (played by Emily Blunt) to recruit a prominent fishing expert, Fred Jones (played by Ewan McGregor) to help him bring salmon fishing to Yemen – ostensibly for a higher purpose than just fishing.

The rest of the moview is about how they make the theoretical into actual – which is quite charming indeed.

Given this scenario, one line has stuck with me.  Harriet is trying to convince Fred to buy in to the idea and says that “some people consider the Sheik to be visionary.”

What makes someone visionary?  If you take this movie as an example, a visionary person:

1) Has a higher purpose.  It’s more than just attaining the vision.  There is a loftier reason for achieving the goal.
2) Has imagination.  They can see beyond the current state and can imagine a more compelling future.
3) Overcomes obstacles.  The vision is not easy to attain.  There are obstacles in the way; however, the visionary has thought through the obstacles and can see a way forward.  There isn’t a “show stopper” that says it is not even theoretically possible.
4) Has contagious enthusiasm.  Once people glimpse the vision, they get excited and get engaged.

Are you a visionary?