NEVER Assume When It Comes to Your Presentation 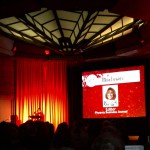 Last night, I attended the Phoenix Business Journal Women in Business Awards Program.  450 men and women gathered to celebrate the success of 25 women who are leading the way in the Phoenix area.  Held at the historic Biltmore Hotel, I was thrilled to meet so many influential women.

Why?  After 20 years of facilitating high level meetings, I still don’t see a huge influx of women in the boardroom.  I won’t go into why (I’ll share that for another post!), but I will share that I was proud to see our community embracing these women.  As the publisher announced the name and read a short bio, the award recipient reached into a bowl and drew out a question to be answered – and then answered it!  Most of the comments were genuine, heartfelt and superb advice for anyone (man or woman) who aspires to be a leader.  One woman actually said, “World Peace” in a nod to the Miss America Pageant!  All in all, it was a truly enjoyable evening and I will plan on attending next year.

Although…..I hate to admit it.  I was disappointed at the same time.  Each of these lovely women were in the front row and were not called up onto the main stage to answer the question.  I understand why, as one woman quipped, “Glad I didn’t have to wear a bathing suit for this!”.  However, the award recipients were standing in the dark, with a small halo of light shining from behind them from the main stage – where they should have been.

Even the keynoter, Renie Cavallari, had to artfully dance from the right to the left of the mainstage during her presentation.  Why?  Because the multimedia projector (which was on a center table) was ON the entire time!  If Renie spent any time center stage, she was illuminated with the bright red scrolling, the name of the event, and the event sponsor logos.  When I chatted with Renie later (she is also a member of NSA), she had “assumed” the audio/visual (A/V) people would have blanked the screen.

It really was no big deal.  Renie is a pro and she didn’t let this little snafu bug her one bit. Lesson learned for me is to NEVER assume.  Think through not only the content and delivery of your speech, but the little things that impact the ability of your audience to see you and hear your speech.

One of the ways I try to remember these kinds of things is to have a pre-event packing checklist.  Fellow blogger and author of Confessions of a Public Speaker, Scott Berkun has an even better one here.  Use these checklists as a guide; better yet, develop your own!

What kind of things do you have on your checklist?