What Memorial Day Means to Me: From the Coast Guard to Military History to Canadian Traditions 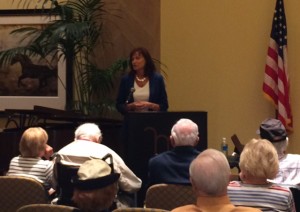 Since I retired from the US Coast Guard and am now a professional speaker, my mother thought it would be appropriate that I say a few words at the Maravilla Memorial Day event.  The program director gave me 5 minutes to talk about “What Memorial Day Means to Me.”

Truth be told, I’ve always been a bit confused about the federal holidays.

I grew up in a neighborhood that didn’t have any military presence, so Memorial Day and Labor Day were simply “holidays” that bracketed summer.  Memorial Day signified the start of summer with school ending in just a few weeks and we all went back to school the day after Labor Day.  Veterans’ Day was almost an afterthought landing quite close to Thanksgiving.

The holidays had more significance, especially since I fit into the latter two categories!  And, I had selected a service that had a lower probability of losing one’s life while on duty.  After all, the Coast Guard was all about saving lives at sea – or so I thought at the time.

The Coast Guard has been involved in every U.S. war from 1790 up to the Iraq War and the War in Afghanistan.

I first realized this sobering fact when my military history teacher told us stories about his patrol boat in Vietnam.  He also shared how some people scorned his service upon returning – confusing the mission with the man.  Those stories left an indelible impression for when I find out someone has served, I always thank them for their service to our country.

In the early 1990’s, I was responsible for sending several hundred reservists out to Desert Shield and Desert Storm. I am happy to report that all of them came back alive and well.

A few years ago, I married a Canadian – and this is where it gets even more confusing.  Canadians (and many nations of the Commonwealth)  celebrate Remembrance Day on the same day as Veterans Day, November 11th, the anniversary of the end of WWI.  They mourn their fallen soldiers on the day we celebrate all veterans.

So I have to ask, Why isn’t Memorial Day on Veteran’s day?  Why don’t we mourn our fallen soldiers on the same day as the Commonwealth?

Here’s why: Memorial Day started out as “Decoration Day” after the Civil War.  It was a time the northern and southern states decorated the graves of the war dead with flowers – but on different dates!  In 1882, the name Decoration Day was changed to Memorial Day and late May was chosen because most flowers are in bloom during that time of year. Over the years it has come to serve as a day to remember all U.S. men and women killed or missing in action in all wars.

Whether you celebrate Memorial day or Remembrance Day, I was most moved when I was in Canada, co-facilitating a training program with Joe on November 11.  We simply stopped what we were doing at 11am.  The entire country stops what it is doing and takes two minutes to remember their fallen heroes.

After the two minutes of silence, Joe showed this video of Terry Kelly singing “A Pittance of Time” of a man and his daughter grocery shopping during those two minutes.

May you take a few minutes this Memorial Day to give thanks to those who have served this great country – and paid the ultimate price.  It is because of these brave and honorable men and women that we continue to have the freedoms and incredible prosperity in this nation.