Creating a Culture of Optimism 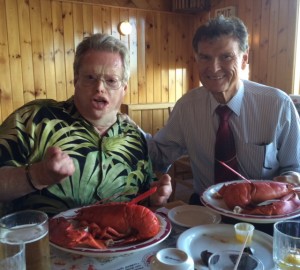 This week I had the pleasure of hosting my friend W Mitchell in P.E.I., where he gave a number of talks to the public and to schools. Many of those who had the opportunity to hear him expressed how he changed their thinking profoundly.

Mitchell has been a U.S. Marine, cable car operator, successful businessman, writer and radio talk show host. He became the mayor of a town in Colorado where he saved a forest and a mountain from environmental disaster.

It has been reported that the character Jake Sully in the movie ‘Avatar’ is based loosely on this period in Mitchell’s life. He is now an international speaker, travels the world on a regular basis and served as president of the Global Speakers Federation. President Bill Clinton once said “I think about what Mitchell says every week.”

He accomplished all this in spite of two tragic accidents he experienced in his life. One was a motorcycle collision where he became a human torch, being burned over most of his body. The second, just four and a half years later, was a plane crash which left him paralyzed from the waist down.

Surprisingly, these accidents did not discourage him. He refuses to look back and complain. Every day he only looks forward to what exciting adventure and opportunity is waiting for him next week, next month and next year.

Mitchell makes everyone he meets feel important — how wonderful a person they are and what a great future they can create for themselves, once they take personal responsibility for their thinking, their attitudes and their behaviours. As a manager, one of your most important responsibilities is to make each staff member feel important, that they count, and that they can make a difference. A manager who is able to create this environment will be surprised at just how well people will respond.

Most people do not want a boss — they want a mentor, someone who sincerely cares for them, provides opportunities for learning and development, and allows them to maximize their talents.

Albert Einstein said: “Example is not the main thing in influencing others. It is the only thing.” Meaning that we all have the power to inspire others by our actions. Here are just a few ideas each manager can use to inspire their team:

My question for managers this week: “What example are you portraying to your employees that will inspire them towards positive behaviours?”

Mitchell’s P.E.I. visit was made possible by the generosity of Danny Murphy, who not only sponsored Mitchell to come to P.E.I. but donated the proceeds of the public program to the physical and mental health initiatives at Colonel Gray High School.