4 Ways to Engage, Empower and Involve Your Employees 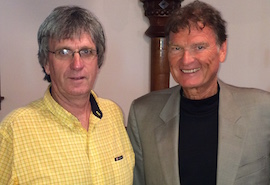 I was having breakfast at the Red Rooster in Crapaud this week with my cousin Charlie Sherren, and we were discussing how people conducted business in our fathers’ time. His father, my Uncle Ned, was a man of solid values who would give more than take, and truly cared about his customers and workers.

Charles was adamant to continue this tradition and even today; the services he provides to others is done the way he would want it done unto him. This may seem like common sense, but he (and many others) feel the concept of personal accountability has been lost and workers just don’t care.

Though the average for the first quarter of 2015 is higher than it was last year at this time (32.1 versus 31.7 per cent), it’s still declining overall. So what is that doing to overall morale, and productivity in our organizations?

In fact, an article in the New York Daily News reports that nearly 70 per cent of U.S. employees are miserable at work and over 30 per cent are actively disengaged. Gallup’s research also suggests there is a strong correlation between employee engagement, and customer satisfaction, increased productivity, and overall profitability.

How did we get here and what can we do about it?

I believe a big part is that many people who rose quickly to management, or became business owners, did not learn the skill of truly delegating and involving.

Yes, they assigned tasks, but they did not truly empower staff and teach them to accept responsibility. This denied workers development and the skill building needed to take on accountability without fear. I have heard it over and over from managers who say: “It’s just quicker to do it myself”, or “Employees today will just mess things up”.

This is the consequence of a “sink-or–swim” or “baptism-by-fire”culture. Under those circumstances employees will certainly lay low and play CYA (cover your arse!) when they see responsibilities coming down the pipe.

The good news is it’s not too late. Here are just a few ideas you can implement that will ensure people will step up, be engaged and even enthusiastic about their work:

My question for managers this week: “Are you mentoring your employees to take on greater responsibilities in a confident, constructive manner?